Today I downloaded the Lync 2013, september 2014 patch to run the install for the Company I work work. It was downloaded from this site:http://support2.microsoft.com/kb/2809243
We have a plan that we want to install it on out internal Lync 2013 environment before we install it for our customers.
Well I have noticed something strange duing the installation of this patch.

I had the same issue when I did  the August 2014 patch for Lync 2013 server, but there I had it on the FrontEnd and Edge server that Windows Fabric failed to Upgrade.

Anyone out there had this same issue when updateing to September 2014 patch?
at September 29, 2014 1 comment:
Email ThisBlogThis!Share to TwitterShare to FacebookShare to Pinterest

This is a strange thing when you are change the external certificate for Lync 2013 Edge server. We did for a customer changed from Geocities to Comodo certificate.

After that we got this strange error in the Eventlogg: Event ID 14428, LS Protocol Stack
TLS outgoing connection failures.

Over the past 8 minutes, Lync Server has experienced TLS outgoing connection failures 18 time(s). The error code of the last failure is 0x80072746 while trying to connect to the server
Then I did a lot of search on uncle Google, but I was not able to find any solutions to this issue.

Read more »
at September 26, 2014 No comments:
Email ThisBlogThis!Share to TwitterShare to FacebookShare to Pinterest

Proxy error on the client and certificate error

The other day I was struggeling with some strange errors on a Lync deployment I did for one of my customers.
The first was that some users did get this error: 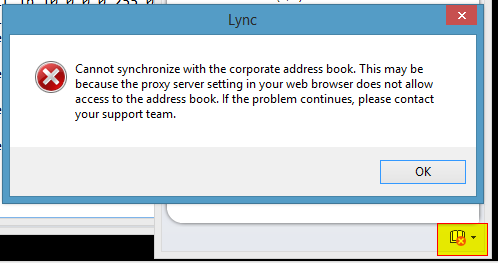