The first we does is to make the server ready. It's important that we use Windows2008R2 SP1 or higher.
Then we update the server with the latest patches from Mircosoft Update.
Then we start to install the prereq for the Lync server. They are :
Message Queuing Server
Desktop Exprerience
GPO Management

I also like to install telnet client on the server. It's nice to have.
We also need to Download the last .Net framework 4.5  http://go.microsoft.com/fwlink/p/?linkId=256375
and Powershell 3.0. Then we need to install Silverlight and run the windows update again.
Then we need to add this to the IIS on the frontend.
The it's time for a reboot and we will get som coffee or Tea.
Then we starts the installation!
We accept the lisence and goes on.
The first we start to do is to prepare AD. Running update on Schema, Domain and Forrest. Normaly when i does that I like to stop the replication for the AD so if this goes wrong I have only messed up one server and then I can do a complete restore from the system backup that I have taken.
When that is done we can reboot and turn on the replication again so that this will push it out to the other servers.

Building the topology
We have now updated the AD and will go on. We install the tools so that we can get the topoloy up. We downloads and store a local copy. 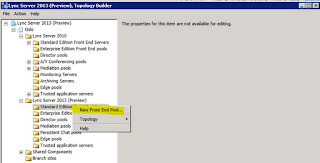 As we can see here we have the old topology and the new one. We are now ready to start to build our frontend server. We right click on the standard editon and choose new server. This the same as we did in Lync2010 and this is well printed @technet implenting guide for Lync2010.
Then we define the SQL store for the standard edition and the fileshare. Remember to define the share on the server as well and to share it to the users in AD.
A new thing on Lync server is that we can and must install the Office web apps server. 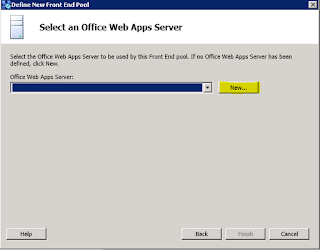 If you have one already in the network this will show up otherwise you need to define it. Then click new.
After this we are done and can now publish the topology.
The we run an install of the Lync Server2013 preview.
Time for a coffee.

After that is done we now start to install or Update the Lync server system.
The first is like Lync2010 we does install local replica of the CMS on this new frontend server.
Then we boot the server and start to Setup and remove server components.
Then we reboot the server and does the certificates.
Then we starts the services and hope they comes up.

Moveing users from old Lync2010 to Lync2013
We can use Lync Controlpanel or Powershell to move users. Since there is some new features about Lync 2013, I will show a picture that shows how move users.
first find the user you like to have as your test users. 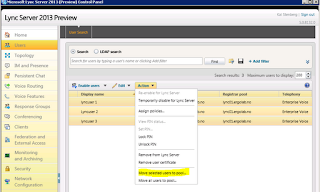 Then mark all the users and go to Action button and move selected users to pool.
Then choose your new pool and the users are moved.
Be aware that the users can't be a part of the domain admin or other admin groups to be moved.  I will recomend that your admin users is not Lync users.